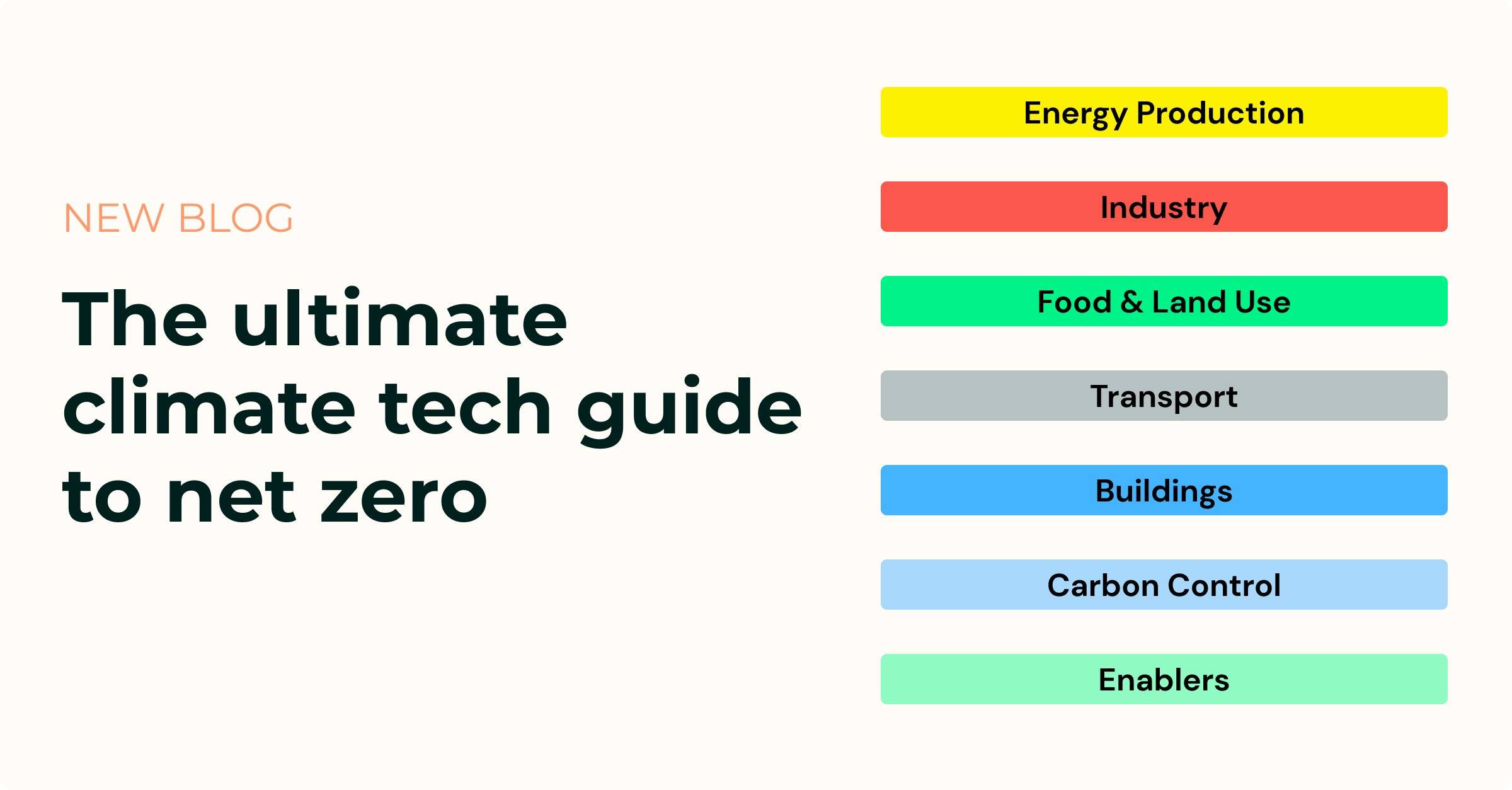 In what parts of our economy do GHG emissions take place? What are the major causes of our GHG emissions? What climate technologies are solving these emissions?

I’ve broken this down by the problem sectors and sub-sectors, and highlighted the pioneering climate tech solutions within these sectors getting us to net zero.

📚 Interesting reads (and one documentary)

In short: The International Energy Agency (IEA) keeps a dashboard of 33 key indicators of whether we’re on track to net zero. Only 2 out of 33 indicators are on track. Which ones do you think they are?

In short: Last month, a giant water battery under the Swiss Alps, which can store as much energy as the batteries of 400,000 electric cars, has been turned on. It will help balance the EU grid and makes money by buying renewable power when its cheap and selling when prices are high.

In short: We need cobalt for EV batteries. China has bought cobalt reserves in countries like the Democratic Republic of the Congo since 2016. Today, it owns 60% of global cobalt reserves and 80% of the world’s cobalt refining capacity. But will Congo and its citizens prosper from the batteries we desperately need?

1,5 degrees is possible, if we have the guts (in Dutch and English)

In short: Many climate scientists think 1.5 degrees is out of the picture but one Dutch climate scientist thinks otherwise. “System change can happen faster than you think; it is not linear. But it won’t be easy. It will take a kind of war economy. You need to make immensely huge investments. And we need to get going like hell.”

In short: Putting the world on track to net zero and less than 2 degrees warming means tripling decarbonization investment for 2021-2025 compared to 2016-2020, according to the Glasgow Finance Alliance (GFANZ). “Private actors could provide 70% of this financing, offering huge opportunities for investors.”

Can We Cool the Planet?

In short: You may have read about direct air capture, concentrated solar or using satellites to map forests, but seeing them in action makes the tech exciting on a whole new level. I recommend skipping the first 5 minutes, it’s just a teaser.

Electrified Thermal Solutions: stores solar and wind power in bricks that can be released at industrial-grade (1,800°C) to electrify hard-to-abate subsectors, like steel and cement. It recently raised $4.5 million.

Fervo: uses its drilling technology (and the workforce of the oil and gas industry) to extract geothermal energy from the earth, which can provide clean, reliable energy at a competitive price. It recently raised $138 million.

This chart shows the expected cost reduction due to the IRA measures per climate technology.

The IRA (aka the largest U.S. bill on climate tech in history) will bring down the cost of climate tech by 40% on average. This brings many more climate technologies 'into the money', meaning accelerated deployment and further cost reductions—due to economies of scale and further innovation.

For example, the tax credit on sustainable aviation fuel will bring its cost down by 26-46%, electric vehicles will become 14-27% cheaper, and the cost of green hydrogen may drop by a whopping 61-88%.

Though this is not enough for the U.S. to meet its carbon targets set in the Paris Agreement, the IRA will bring the U.S. much closer to them. It will increase its expected GHG reduction by 2030 from 30% to 40% (the U.S. originally committed to 50%).* That's a huge feat Mr. Biden and other Democrats!